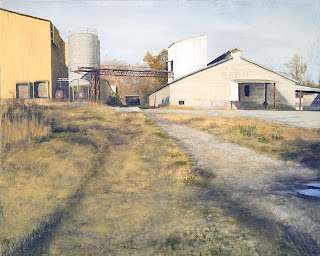 This is a new one, built around the painting "Scott Fertilizer Plant". I went back to this site, about a year after I started the painting, and found many good objects (or they found me, if you look at it that way), especially in the buildings off to the right. There are more diagonals in this composition than in the previous one. I have also collected more interesting information on this plant, which was a mixing plant for Scott brand Potting Soil. There are, like so many locations, strange connections here. The property is currently held by W.R. Grace & Co, founded by William Russell Grace, first Catholic Mayor of New York City. The heir of the founder, J. Peter Grace has some links and membership in extremely conservative groups like the Sovereign Military Order of Malta, and the Council for National Policy, dedicated to the creation of a Christian theocracy in government in the United States (and elsewhere). This company is also the one depicted in the film "A Civil Action" and has been involved in some massive contamination and environmental lawsuits.

Here is the final composition. It is organized as a triptych, with the left panel suggesting more enlivened organic and agricultural themes, the middle containing the perspective image of the plant, and the right panel suggesting the passage of time and decay, dominant with wood, metal and past images of the location.
Posted by David Scott McCurry at 1:15 PM No comments: