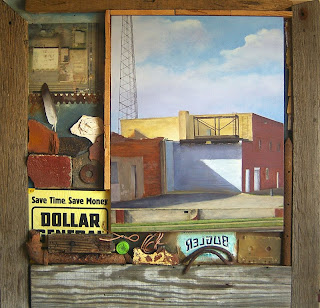 Technical note update: Adhesives...
I mentioned earlier that I used the Liquid Nails Heavy Duty construction adhesive for the wood and masonry objects. On Judy Hiramoto's suggestion, I tried the craft adhesive E6000, which is crystal clear and very tacky. It worked great on the glass (over on the upper right inside edge between the painting and the wood) and for several of the metal objects. Some elements are nailed in place with either galvanized finishing nails, or copper plated brads; I'm a stickler for the "archival". The painting itself is attached to the backing board with screws from behind.
Posted by David Scott McCurry at 3:03 PM